On this page you will find meanings, motivations for symbols, text and images for tattoos. Keep in mind that the human psychology is a variable, and this may not apply to some and all. As a reference, you can categorize the location of the tattoos based on their location on the body.

You will often notice that people with tattoo really wants you to see their tattoo. Girls will explicitly wear dresses that expose the tattoo, where ever it is.

People with chest tattoos will make sure they wear v-shirts to show the tattoo, even in winter.

Ankle tattoos has increased in popularity and with this change of fashion. It is now considered normal resisting the cold with no socks or ankle socks to show the art.

Private parts of the body tattoo:

Just as it says, for private eyes to see.

Well concealed and most popular, for men it is often associated with muscle and training.

Symbol meanings and the message to you

More than one star, emphasis on the message 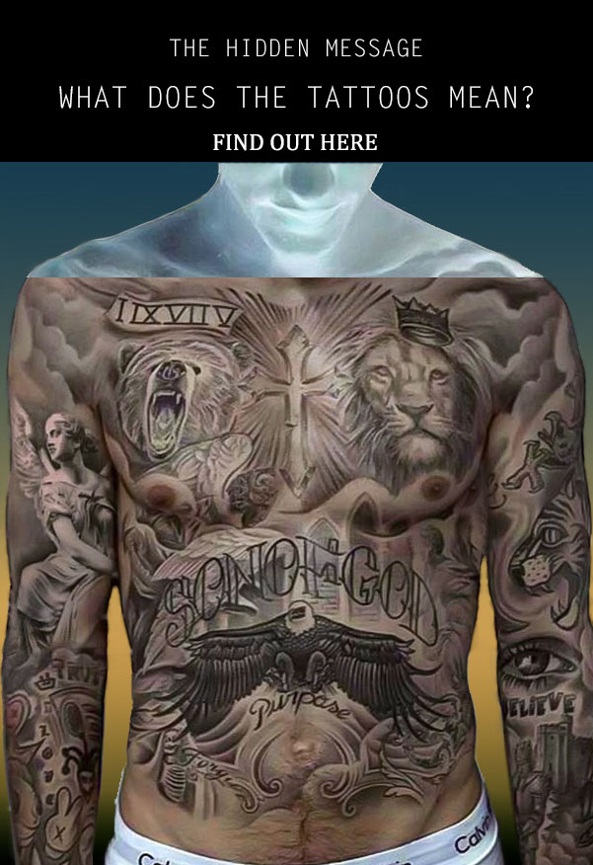 WHAT DOES THE TATTOO MEAN ?

A quick psychological analysis of Justin Bieber’s new tattoos based on his popular music career.

First eyesight on the massive coverage of the tattoos says two things:

1. He is not statisfied with either his skin color or his body as a whole.

2. He has a very clear message that he want’s everyone to see, which he firmly believes in.

Before diving into the symbols, we will take a quick look at the positioning of the tattoos and their importance.

The upper chest is the strongest message and the middle of the chest the center of the message as a whole.

If the tattoo is to be read as a book or looked at as an artform, the senter is the title of the book and the pages spreading from the middle equally outwards, where the meaning of the symbols gets less and less importance.

Strong belief in god, based on the other images on his body. Also symetrical symbol for the center of the body, reflecting arms, head and the legs.

The center is also emitting some form of light and considering it is above the heart, something that beats with his heart.

The Bear and the Lion

Two strong animals, with great power and which are considered dangerous. In this case the Lion is the king, giving the idea that the tattooed person does believe in being above other “animals” in the kingdom. The bear, compared to the lion has a open mouth, showing its teeth, showing that he considers this side of the body superior and stronger than the king of the forest side.

The angel and the Eye

There are two belief based symbols on each arm, the eye has a reflection, showing something considered to be important. The word Believe suggests something that has been seen, this can be a dream, or in a transform, either by drugs or deep meditation. The female angel is faced towards the body, giving some form of protection and support to the center image.

The senter of the stomach has the word SON OF GOD clearly written, followed by an eagle, then the word Purpose.

The surroundings of the bird has some sort of sanctuary and a gate, which in this case most likely represents heaven.

The eagle however seems to be guarding the entrance, in a threatening way, suggesting the right to be passed and accessed is not yet achieved.

Our best bet, is with time, right under the gate, marks will be placed for each great accomplishment he makes, giving the right to himself to feel deserving of heaven.

Read also: Why have tattoos become so popular among young people